The ShapeOko has been sitting idle for a while, so I decided to take a stab at making my own speakers. 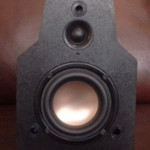 I wanted to do something small that I bring outside and hang on my pergola when entertaining guests on our new patio.  After perusing the web and checking out some speakers and online enclosure calculators,  I landed on a set of HiVi B3N’s (3″) and tweeters.  Given that they won’t be permanently mounted outside, I wasn’t too concerned about waterproofing the speakers.  Instead, the design is along the lines of water resistance.  After doing some calculations on the enclosure size, I threw logic and math out the door and bent the rules by going with a design I had in mind.  The volume of this design is not far off from the ideal size, so I expect some sound issues.  However, I am counteracting that by using ABS which is strong, and only 9mm thick (so I gain back some lost volume).  I also went with a sealed design which I understand is better for when you want to achieve a smaller enclosure…

I was toying around with different ideas including using MDF.  I wanted to try something different and take advantage of my CNC mill and materials I had laying around.   I had some sheets of 9mm ABS that I figured would be worth a try.  The thickness makes it rigid enough for an enclosure of this size.   If you look at the gallery, you can see the design calls for some angles and rounded corners.  I did not want to have to cut individual side pieces to fit each angled edge.  Instead, I came up with the idea to form 2 sides for each speaker and join them together later.  This required using controlled heat and careful bends for each angle.

I also needed way to ensure that the bends followed the outline of the speaker based on the design.  I did this by cutting slots on both the inside faces of the front and back plates.  Using a heat gun I applied heat, while bending an angle inserting the speaker along the slot path as I went along.  To make sure it worked, I did some test cuts to see if it would work (below).   I was pretty happy with the result.

Since the B3N’s are full range speakers, I used a 1st order crossover to cut off highs from the driver so the tweeter could do it’s part.  Based on some calculations, a 0.18mH inductor was used for the driver and a 3.9 mfd for the tweeter.