Other times, robots are built based on random ideas. This robot is a case of solving a LEGO challenge – specifically, with their Technic tracks/treads #575518.  At no fault of theirs, these plastic tracks are slippery on many surfaces.  Great for carpets, flat areas, dirt (if you dare) – and great for turning as well.  However, when you try to climb with them, they are as slick as ice. 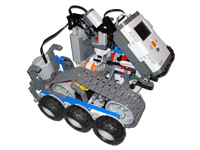 If you Google them, you will find some great ideas on making these treads more ‘sticky’.  Some have used 1/2 Technic pins (which fit nicely into the supplied holes), others have used elastics wrapped around them – all great ideas that work fine.  I attacked the challenge from a different angle.  The result is DG – or Dual Grip (yes, the name is somewhat plain).  DG went through numerous revisions as I worked out kinks related to weight, stability, traction, sensors, flex etc.  At the bottom I have included some pictures on previous versions of DG – some changes significant, others subtle.

The idea was to have a treaded robot that could navigate varying terrain, turn quickly and of course, climb.  Based on my experience with my other robots using the same tracks (eg UNV and DynaTrax), I found that they were not very good when it came to inclines.  I figured that the LEGO rubber wheels have great traction on most surfaces, so why not slap a set of them along with the treads.  However, this posed another challenge.  I did not want both wheel systems in contact with the ground at all times as this would make turning tougher and be redundant. 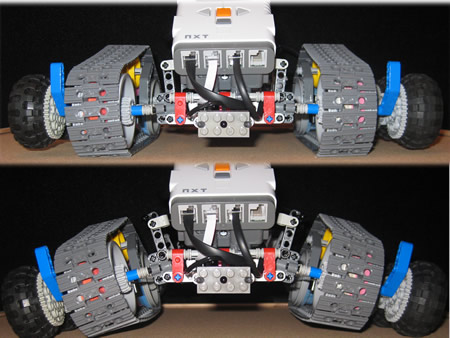 I considered creating a dual drive system with rubber wheels and tracks separated by a mechanism that would deploy the rubber wheels downwards when needed. However, after some thinking, I decided on an alternate route.  In order to make it easy, light and effective, I figured the most effective way of doing this was to build the rubber wheel drive directly into the tread drive and have the entire structure rotate to change contact points.  I am sure there are numerous ways this could be done, but this seemed like the easiest and most obvious approach.

How does it work?

The current version of DG functions in a dual state mode – a combination of both autonomous and remote control activity – all working at the same time.  The autonomous portion consists of the NXT brick, a Mindsensors Accelleration Sensor (2 axis2/g), and an NXT motor.  The remote portion uses the Power Functions system with a remote control. Its purpose is to drive and steer.  When running, the NXT is monitoring the robot via the Mindsensors Accelleration Sensor and can detect when DG is beginning a climb.  When it detects a certain (consistent) level of G’s, it triggers the NXT motor to deploy causing both sets of track/wheel combos to angle themselves.  This results in the wheels making contact with the ground, and the treads loosing contact (more grip).  When the robot reaches level ground, it reverses and returns the tracks to level.