In a few weeks, we’ll have a new patio.  Like any new project I get into, I have to introduce a flavour of something DIY and electronic into the mix.  Like most guys, I’m planning for sound.  However, I’m also adding custom LED lighting to light up the armour stones, deck and pergola areas.  As part of the patio job, we are also planning on having a variety of plants and shrubs around the patio.  I figured it would be neat, for when we are entertaining, to have LED RGB glowies that I could place in each of the shrubs/plants and have a RGB glowing garden as an entertainment piece.

I wanted something cheap and quick that I could pull out on short notice, turn on and drop into the plants to have a light show for the evening.  I also wanted something that I could whip together quickly.  Can’t really claim this as my idea as its been done many a time… Since I also wanted the components to be water resistant, and I wanted an easy way to power the units on/off, the concept of a Reed switch and magnet came immediately to mind.  The idea being to have a magnet attached to a stick that is stuck into the ground.  Then, when it comes time to put the glowies out, I would just stick them to the magnets.  They would serve 2 purposes; 1) to hold the glowie in the middle of the shrub, and 2) trip the Reed switch to turn the glowie on.  With that plan, I went hunting.   I managed to fleebay some RGB LEDs, reed switches, 2032 batteries (DX) and some coin cell holders.  Total price < $10.  Not bad.  I managed to scrounge the tiny plastic ball casings from some of my kids toys (shhh).   They are perfect casings that just fit the battery holder and bits all inside and are < 1″ in diameter..  The RGB LEDs also have an embedded microchip that automatically slowly cycles them between all level of RGB combination of colours (not just red>green>blue, but everything in between).  This saved lots of time, money and space as the alternative was to cobble together some ATTiny85/25’s and have each PWM the LED’s..  That would have pushed this project into the “not worth the effort territory”.  These suckers only take a few minutes each to put together. ..and you don’t have to be a soldering expert to do it.

Anyway, I’m happy with the result.  The glowies are just visible inside the plants, but no too bright that the are a big distraction.  This is an easy project that most anyone with basic soldering skills can do – and for < $10.  Check out the night effect in the front garden below. 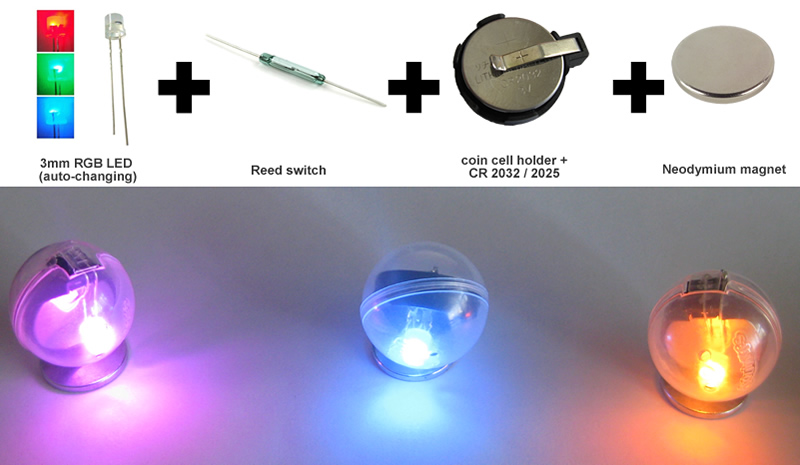 Result: Pictures don’t do them justice, but the glowies have been placed inside each shrub/bush and are noticeable from a distance.   The effect is nice as each cycles through all the colours in the rainbow – all without a micro-controller.