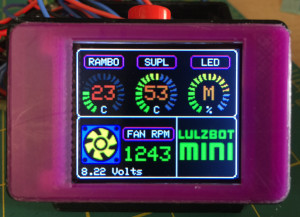 I’m on a mission to reduce the amount of noise my LulzBot Mini 3D printer makes.
I’ve already added a motor damper to the Y axis.  However, one thing that is consistently noisy is the case fan.   It’s on at > 70% nearly all the time.  In addition to this, the air vent fins in the side of the case amplifies the fan noise.  So, I decided to build my own fan controller.   Killing 2 birds with one stone, I also wanted to merge my LED light controller into this project.

What does it do? 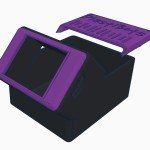 Pretty straight forward.  An Arduino Nano is at the heart of it.  It monitors 2 temperature sensors mounted in areas that get hot.  Before selecting the locations, I ran a test print and used my laser temperature gun on the main board to see what areas got hot.  As expected, the 4 motor driver chips on the RAMBO boards were it.  They ranged from 30 C (idle) to 85C (printing).  As the X & Y axis get the most action, I mounted a sensor directly to one of those chips.   The other was mounted to the power supply, but this does not get very warm. When the printer is turned on, the Arduino controller idles the fan at about 650 RPM.  It never turns off.  At this level, you can’t even tell it’s on.  When printing starts, the Arduino polls the sensors every second and adjusts the fan speed based on the stepper motor controller chip temperature.  The sensor returns Celcius values.  Temp ranges (30-90C) are mapped to the AnalogWrite function to control the fan speed from idle (~650RPM) to full  (~2200 RPM).

I also merged LED control into this project.  It has a push-button on top.  Using an interrupt, it allows switching between high, medium and low light levels.    The display is there for s*its and giggles really..  I had some laying around and thought it would be cool to provide some visuals.  That way I would have something else to do for those times when I find myself staring at a print job for prolonged periods of time.    The display shows the RAMBO and power supply “SUPL” temps, the LED level, an animated fan icon, the fan RPM and voltage being applied to the fan.  The Mini stock fans are 24V, but for this project I dropped everything to 12V.. The project, LEDs and fan are all powered by a switching regulator that takes 24V from the internal power supply and drops it to 12V.

It’s also important to note that this project is not specific to any one device.  It is completely standalone.  Simply supply 12V and mount/glue the temperature sensors wherever necessary.

How well does it work? 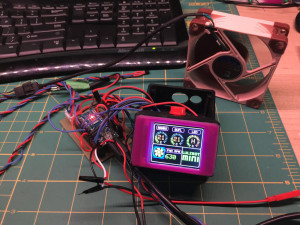 I’ve mounted the temperature sensors, the fan, connected power and have started further testing.  Overall, I’m very happy with the result.  The fan is quiet now and idles at about 600 RPM.  Once the printer starts and the driver chips begin heating up, it ramps up to 1200 RPM.  Even at this speed the fan is barely noticeable.  The hum of the steppers stands out more now.  Before I mounted the temp sensor, I used by laser temperature gun to monitor the status of the motor driver chips both during idle as well as printing.  Given the X & Y motors do a lot more work, I focused on those 2 chips.  At idle, they hovered around 30-40C.  During printing they would heat up between 65-80C.   With the case closed, I don’t think they would normally hit 80C.  This happened because I was mucking around in the case and the stock fan was not able to do its job (too far away with the case open).

When I mounted the LM35 directly to the chip, the readings were much lower (high 40’s during printing).   There could be a number of reasons for this.  The Noctua could be doing a good job, or there is some loss in thermal conductivity with the glue I used to mount the sensor to the chip (did not use thermal past).  However, there is only a very thin layer of glue between the two.  At the moment I’m mitigating this by dropping the maxTemp value so the fan ramps up more quickly.  I’ve got some tiny heatsinks on order. Once installed, I’ll mount the LM35 to the sink itself and calibrate the temperatures after further testing.

So, I’ve been printing now for a week or so and have a few observations: 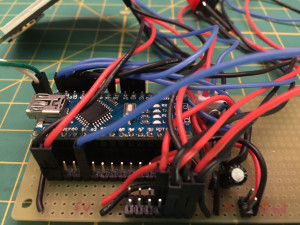 I went with a different approach for this project.   I have enough projects under my belt for some lessons learned.  A common theme I find is that I want to change things up days or weeks following the completion of any given project. The issue is that when you solder components directly, you run into a mess trying to shuffle or add things.  So, I went with a more modular approach: 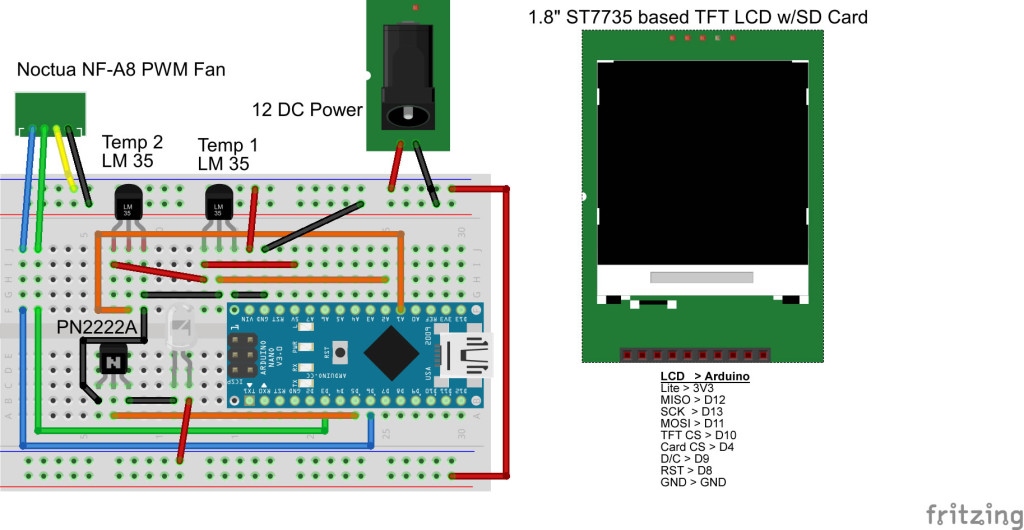 Although this was built to run on an Arduino Nano, it can easily be adapted to most other duino’s.  However, there were few digital pins left after connecting the TFT, so I would stay with a Mini or higher. You will need the following libraries: